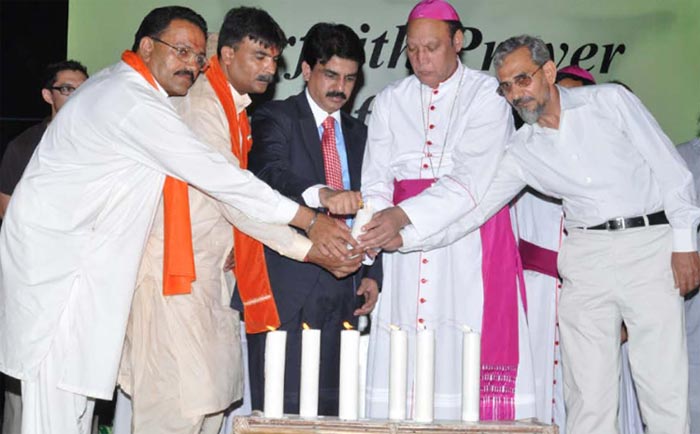 The National Commission for Inter-Religious Dialogue and Ecumenism (NCIDE) in collaboration with the Federal Ministry of Minority Affairs conducted an “Interfaith Prayer” for Peace in Pakistan on Saturday, 7 August 2010. The commission prepared a documentary on the recent crisis in the country where floods, hunger, misery, political and ethnic violence and negligence are taking their toll on the people. The first candle for peace was lit after the documentary. The programme was attended by religious leaders and representatives of different faiths like Christianity, Hinduism, Islam and Sikhism along with representatives from the US Consulate and Honorary Consuls Indonesia in Lahore.

The programme began with a welcome and introduction from Rev. Fr. Bernard who shed light on the importance of such assemblies where people of one nation belonging to different backgrounds come together to pray for a united purpose such as this- a prayer for peace and prosperity in the country. The first prayer was led by His Lordship Bishop Dr. Andrew Francis (Chairman NCIDE) and Catholic Bishop of Multan who expressed his solidarity with the people of the country and expressed his grief over the events such as massive flooding in all the provinces of Pakistan and violence in Karachi. He called upon the entire community to join him in prayer after which he lit the second candle for peace.

Subsequently, the Muslim community was represented by Mufti Maulana Maqbool Rehman who prayed for the sufferers of the catastrophes occurring in the country and appealed to the entire community and leaders of the country to unite for peace and solidarity with the victims of flood. He also stressed the need to take concrete steps towards a better future. The fourth candle for peace was then lit.

Sardar Janam Sikh led the peace prayer and represented the Sikh Community. He also stressed on equal opportunities and the need for cooperation and peaceful co-existence if we desire to live together harmoniously as a nation. After reciting a prayer from Sikhism, he lit the fifth candle for peace.

Javaid William, Executive Secretary NCIDE, then invited all the representatives of different faiths, the Chief Guest Mr. Shahbaz Bhatti, Federal Minister for Minority Affairs and Mr. Pat Contreras Public Affairs Officer of the US Consulate in Lahore, Mr Muhammad Mustafa (G.M Malik) Deputy Secretary General MQI, Sajid Mahmood Bhatti, to release seven doves as a symbol of promoting peace in the country and to light the sixth candle for all the other religious communities residing in Pakistan and to recite a prayer according to each ones faith for peace and harmony in the country. Mr. Shahbaz Bhatti then spoke to the entire community gathered on the importance of peace as the sole need of the hour where all communities must be represented equally and given equal opportunities along with building a spirit of coexistence and acceptance in order to maneuver the nation towards a bright future. With this, Mr. Shahbaz Bhatti lit the seventh candle for peace in Pakistan.